Davaar Island or Island Davaar is located at the mouth of Campbeltown Loch off the east coast of Kintyre, in Argyll and Bute, Scotland. It is a tidal island, linked to the mainland by a natural shingle causeway called the Dhorlin near Campbeltown at low tide. The crossing can be made in around 40 minutes.

In 1854, a Lighthouse was built on the north of the island by the lighthouse engineers David and Thomas Stevenson. The lighthouse was automated in 1983, and today, Davaar is inhabited by caretakers, sheep, goats and mink.
The Lookout, a square building standing on a small knoll close to the lighthouse, was built during World War Two to house naval crews, whose task it was to stretch anti-submarine nets across the water, protecting Campbeltown. It is now rented out as a holiday home.

The island is also known for its seven caves, one of which contains a life size cave painting depicting the crucifixion, painted in 1887 by local artist Archibald MacKinnon after he had a vision in a dream suggesting him to do so. The painting caused uproar in the area as it was seen as a sign from God; it is said that when the townsfolk discovered it was MacKinnon, and not God, he was exiled from the town indefinitely. Restored several times since, including twice by the original artist, the painting was vandalised in July 2006, having a red and black depiction of Che Guevara painted over the original masterpiece. It has since been restored again.
Davaar Island is one of 43 tidal islands that can be walked to from the mainland of Great Britain and one of 17 that can be walked to from the Scottish mainland.
In 2001 the island had a population of 2 as recorded by the census but in 2011 there were no "usual residents" living there. 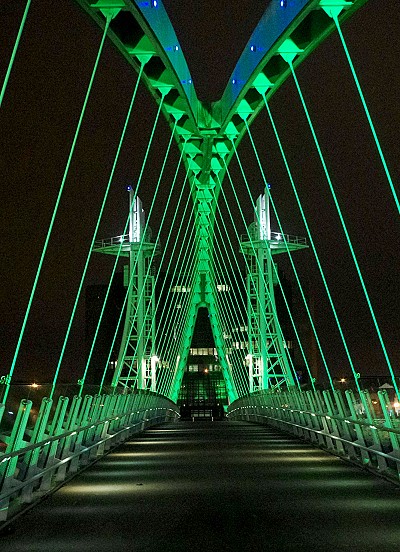